Virginias are creepy mutants that can be found in caves and will spawn above ground on day 7 or after. They were added in update v0.01 to The Forest.

There are two variants: the more common, pale skin colored version and the rarer blue version.

The Virginia makes skittering noises like a bug or a scorpion, so it is sometimes possible to hear them before they are seen; however, she is much quieter in comparison to the Armsy or Cowman.

Like Armsy, Virginia is suggested to have been created by Sahara, using the Resurrection Obelisk, resulting in her mutations.

In the Orientation Slideshow, Virginia is called "Subject 37B5", and her age being twelve at the time of her mutations. The slideshow states that she developed multiple sex organs, which could indicate that they give birth to Mutant Babies. Similar to Armsy, she developed face distortions, and her multiple limbs may have been a result of sibling rivalry. Judging by some drawings and pictures taking her as subject such as the latin paper, the Virginia was on the peninsula for a long time, maybe even before Sahara bought the peninsula as well.

Virginia is the easiest of the three large Creepy Mutants to attack in caves, as confined spaces are equally as bad for her as they are for the player. Molotovs, fire arrows, and flare guns are effective against a Virginia as it will also illuminate the dark caves. Using a flashlight upgrade for a crafted bow or modern bow is also useful. Lighting her on fire allows for constant visual contact of Virginia in caves and helps players more easily dodge any leaping attacks.

In multiplayer, having one player with a melee weapon with good block, defending the attacks while other players use ranged or well-aimed molotovs on a flank is a good and safe way to kill a Virginia. Most Virginias also contain a posse of mutants or mutant babies with them.

Fighting Virginia on the surface is similar to in caves, however open spaces allow her to leap and charge far more consistently. Virginia can leap as high as the cannibal huts are, making her a formidable opponent. As with all Creepy Mutants, ranged fire weapons such as fire arrows, explosives, and molotovs are effective in both damaging Virginia and avoiding player damage. The attack range on spears exceeds that of Virginia, which provides good mobility and hitting potential; however, her charges can and will quickly overcome the spear as she slams straight into the player. As she is usually always accompanied by mutant babies and/or cannibals, it is highly recommended to dispose of the followers first to avoid getting flanked. Melee weapons are not recommended against Virginias due to the speed of their attacks.

Later in the game, a blue-skinned Virginia may be encountered. They have more health and are both stronger and faster. The player is advised to take extra caution with blue Virginias due to their increased stats.

A blue Virginia can be found in the large wet cave room near the modern bow location.

Around Day 14, they will begin spawning on the surface, but they are rare for quite some time. They may often travel with other creepy mutants. As the days go by, they will slowly become more common in creepy mutant groups.

Up to two Virginias can be encountered at any given time, one of which could be this blue variant. However, if more than one creepy mutant patrol spawns in close proximity to one another, this number could be higher.

Around Day 14, they can be encountered in caves, often at locations where armsies have resided earlier. Two of these locations are the cave where you find the chainsaw and the cave between the Katana and the chainsaw where you earlier will encounter an armsy. So far research has proven that they will not spawn the first time you traverse through the cave. Be aware that this is not confirmed information, but rather speculations based on experiences that can't be explained. Of course, there is the possibility that it's just a bug. Further research is necessary. 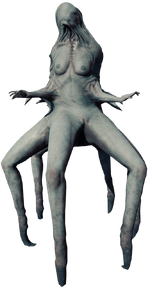