The Forest Wiki
Register
Don't have an account?
Sign In
Advertisement
in: Pages with lowercase titles, Versions

v1.0 is the name the developers have provided for the full release version of The Forest. It was released on the 30th of April 2018. Prior to v1.0 full release, 4 pre-release patches were released. These contained most of the content, they are also listed here.

Today The Forest moves from early access into a full release. It’s been a crazy ride, made possible only by the players who have supported us for the last four years. To the team here it feels like a game we all made together, us and the community. Your input suggestions and feedback has been invaluable to us.

This version of the game adds a bunch of new stuff, from a craftable warmsuit, significant re-work of the endgame and a new alternate ending. Along with this there is a ton of cave re-work and polish and many many improvements and fixes.

There is a lot we still want to do, and plan on heavily supporting the game moving forward. Some other big items we hope to implement soon are proper cheat controls in multiplayer and fixes to the issues that will likely come up in this release.

Today we are also announcing our first major update to the game. The VR version of The Forest will release for free to all players of the game, on May 22. It’s the full game, with your hud on a smart watch, a full 3d inventory, and tree cutting using motion controls. We think it’s the most fun vr game we’ve ever played and can’t wait to share it with everyone.

We know there are a couple reports of crashing and keyboard related issues that came up in the last 2 days and will aim to get fixes for those as soon as we can.

Edit - We just uploaded a small hotfix, fixing an issue with some players keyboards.

Pre-release updates were released prior to v1.0. They had some trouble with the release, hence the amount of pre-release patches. They have been added here to prevent confusion. They are technically still v1.0.

Here’s a fix for some issues that came up last night.

Here’s another pre-release patch fixing some issues that have come up since this mornings patch release along with some key binding and other fixes and improvements.

Here’s another pre-release update fixing some issues that came up in yesterday's patch.

Also, we are looking into some performance issues that were reported by some players yesterday, it would be really helpful if you could let us know your specs, graphic card and which play settings you use in the comments below so we can help fix the issue.

This is our first pre-release patch, expect a few more in lead up to release as we try and fix up the last remaining issues.

This patch contains a ton of fixes, changes, optimizations, new items, new story elements, some new buildables, and a ton of surprises we don’t want to spoil via changelog. We’ll release the full list of changes on Monday along with release.

Oh and there’s now a locked door on the yacht.

There was no change log provided. However, here is a run down of what has changed based on player experiences:

Options – Options menu has as had a slight over haul. Bit more organization has been added

Information prior to release[]

This is the information the developers released prior to the full release. It was almost entirely obtained from the patch notes from v0.73. It is kept here at this stage for record keeping, it may be removed at a later date.

As a result of the close release date, the developers stated they are no longer doing timed updates and instead focusing on finishing the game. There will be updates along the way though they will be released without indication. They also stated that they will be putting out release candidates as we get closer to our first final. Here is an explanation of what a release candidate is from Wikipedia:

A release candidate (RC), also known as "going silver", is a beta version with potential to be a final product, which is ready to release unless significant bugs emerge. In this stage of product stabilization, all product features have been designed, coded and tested through one or more beta cycles with no known showstopper-class bugs. A release is called code complete when the development team agrees that no entirely new source code will be added to this release. There could still be source code changes to fix defects, changes to documentation and data files, and peripheral code for test cases or utilities. Beta testers, if privately selected, will often be credited for using the release candidate as though it were a finished product. Beta testing is conducted in a client's or customer's location and to test the software from a user's perspective.

The developers stated that once The Forest is fully released its price will rise from $14.99 USD to $19.99 USD.

Here is a list of conversion rates by currency dated February 5th, 2018. It is to provide an estimation of how much the game will cost before, and after full release:

The developers stated some of their plans of the full release. They have more planned though they most likely want to keep some surprises in store for players. Here is a list of what the developers have currently stated (sourced from v0.73 patchnotes):

These are the notes where most of the information from this page was extracted from, v0.73:

We wanted to share our plans for moving The Forest out of early access and into a full v1.0 release. We’re aiming for a release date towards the end of April. We’ll have an exact date when we are a bit closer. On release of v1.0 the price will increase from $14.99 USD to $19.99 USD

There are a bunch of new features we’ve been working on for v1.0, and want to give everyone an idea as to what we’re planning on shipping with. Languages and controller support will be improved and officially supported. We’re going to be adding new reasons and resources for killing the creepies. There will be a rethinking of the cold and warmth system, including a new warm suit. New buildables will be added. There will be some big performance optimizations especially for late game saves. Changes and improvements to how multiplayer save games work and along with this a bunch of dedicated server improvements. The multiplayer clothing system is being improved and expanded, with a new system to allow you to switch outfits. We’ll also give some details about a VR game mode when we are closer to release. Along with a bunch more we don’t have room to include here, we have some really crazy and fun surprises in store, especially regarding the ending and are really excited to see what people think.

To focus on pushing this out we’re going to stop doing the smaller timed patches. To keep everyone involved in the process leading up to launch and to help ensure the release is as good as it can be, we will be putting out release candidates as we get closer to our first final.

On the 5th of April 2018 the developers shared as follows:

It’s been a long journey and we’re really excited to show everyone what we have in store.

The Forest was released on PS4 on November 6, 2018. The image below is a concept on the PS4 edition completed by Farket. 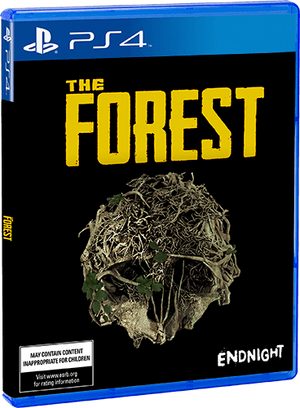