The Plane -- after examination appearing to be an Airbus A320-200[1] -- plays a large role in the story as it is the reason why the player is on the Peninsula in the first place. During the intro animation there appears to be an explosion from the right side of the plane where the cockpit detaches from the body. After the nose and the left wing of the plane break off, the plane hurtles down onto the peninsula where the body crashes through the bushes and branches before coming to a stop where the beginning of the game takes place. The Cockpit, part of the plane, spawns every game in the mountain area. 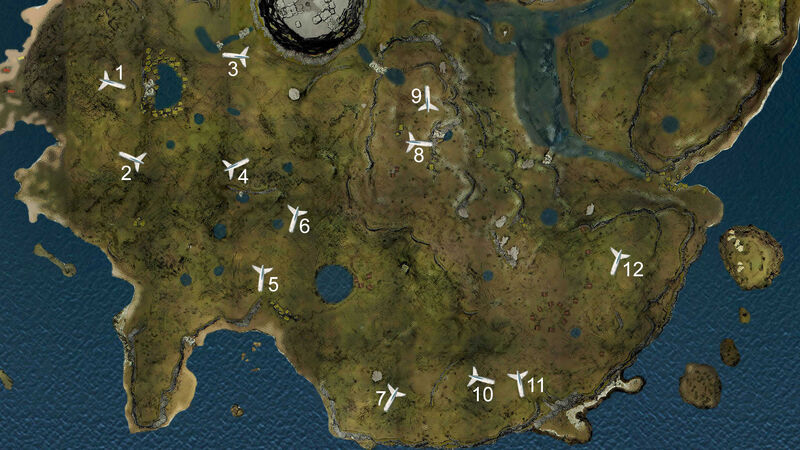 Each new game will bring a new location of the plane crash on the peninsula. There are several set spawn points:

Origin of the Crash[]

It is heavily suggested that the plane was brought down by the power obelisk, operated by Dr. Matthew Cross. The power obelisk functions as an EMP-type device, and Dr. Cross knew this before using it. He crashes the plane in order to find a suitable sacrifice to use for Megan in the resurrection obelisk.

In v0.18 new plane and cockpit models were added. Post-v0.18 planes include overhead luggage compartments, a lavatory, and a modified posterior end of the interior. The front of the new plane's model where the cockpit separated also includes a more ripped and bent metal look. After the update, the type of aircraft made more probable the theory that affirm that the plane is an Airbus A320-200[1].

The Broken Plane was an object that existed on the map in previous versions of the game. It was an invisible plane that casted shadows can could be jumped on and ran into, and it is possible that it is an Easter Egg. It is also possible that it may be re-added to future versions of the game, or moved to the Mountain Area. It may also be involved in the story, possibly being the source of the Survivor movie producers. When opening a decompiled version of the plane's 3d model, you can see that the plane is a small, high-wing, single-engine piston plane (likely only holding a very small group of people). It has a tail section, broken main wings, and its nose is bent and smashed.