From The Forest Wiki
Jump to: navigation, search
This article may need cleanup to meet quality standards.
Please help improve this if you can. The Discussion page may contain suggestions.

This is a guide to the story in The Forest. The story is currently more or less complete, though the game developers will probably still add to it. This page attempts to place all the assorted story pieces in chronological order. It mostly covers major events, as the rest of the story is left somewhat unclear.

The story is the background of the game. Much of the story is optional, and in many cases, can be completely ignored while still beating the game, such as in the case of a speedrun. Many story items can be found that add to the story, some of which can be added to the survival guide in the notes section.

In the to do list, the first task listed is 'Find Timmy'. This prompts the player to begin exploring the Peninsula and to advance the story.

Ending the game unlocks creative mode. After ending the game, the player can continue playing to the same save file.

Lake in the Peninsula.

It is assumed that The Peninsula is located in Canada or another similar northern location, due to the climate, animals, geography, and location of the developers. It comprises the majority of the setting for The Forest, and includes both an extensive below-ground cave system and large mountains, in addition to the basic forest floor.

It is assumed that the caves suffer regular cave-ins, due to both the sounds the player can hear while in the caves (rocks tumbling) and the fact that several bodies (such as the Christian Missionaries below) are in an area only accessible by the rebreather yet come from a time period without such technology.

Across the island, ancient-looking obsidian doors, artifacts - such as the Obelisk - and structures can be found. Some of these structures require sacrifices of some sort, including live human beings. These suggest a 'Lovecraftian' sort of ancient power. As well as that, mummified corpses can often be found near and around the doors, corpses that were left alone by the cannibals, suggesting the doors and the things found near them predate the cannibals (or perhaps the corpses weren't good to eat). This suggests that the use of the resurrection obelisk produces misshapen mutants, such as the Armsies, Virginias and mutant babies, (also seen prior to the boss fight with Megan Cross), and that it has been used before the first truly notable visitors - the missionaries - came to the peninsula. For reference, please see the Virginia Sketch and the Latin Paper.

At some point (probably late 19th or early 20th century), many Christian missionaries or priests came to the peninsula. The Latin Paper, presumably belonged to said Christian missionaries, can be found in an abandoned camp in Cave 1 surrounded by aged items such as raw dynamite sticks. The Virginia Sketch almost certainly belongs to the missionaries, as it is drawn in the same fashion. It can be found near the grey tents with Bibles and crosses that seem to be a hallmark of the missionaries, along with being near lots of mummified corpses, praying to an obelisk drawing.

Due to the presence of the Latin Paper, it can be assumed that the group of missionaries were Roman Catholics or similar, including someone with decent knowledge of church Latin. They left many Crucifixes scattered around the place, along with crosses projected on to walls sometimes near their heavily decayed and mummified corpses. Bibles too are a frequent find near their old camps and inside the caves next to the corpses. Their corpses are often left alone and mummified, which suggests a sudden catastrophic event which led to their death. According to the Latin Paper, the Missionaries encountered a four-legged woman, most likely referring to Virginia. This would mean that mutants at least were already on the peninsula at this point, further pointing towards the artifacts as the cause of the mutants. 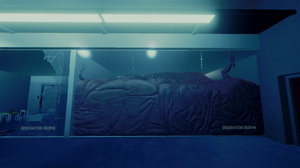 Sahara Therapeutics purchased the Peninsula at some point to conduct its experiments on "eternal life" and resurrection through the obelisks, and built a complex system of offices and research labs, stretching as high as the mountains to deep below the ground into the caves.

The Jarius Project was probably first marketed as a program, whose aim was to heal terminally ill children. These initial test subjects may have been sick children whose parents had volunteered them for participation in clinical trials at the facility where they were relocated to and continued receiving medical treatment. It's possible that Dr. Matthew Cross began experimenting with the artifact by using a living child to revive one that had died. However, this would in turn result in the death of the submitted child, who themselves would subsequently need to be revived at the cost of another, thus creating a cycle of child sacrifice and resurrection.

After the process, they were placed in observation rooms where they began to develop genetic mutations ranging from grotesque physical deformities to highly exponential growth rates. These genetic mutations were isolated and studied for their possible applications in other fields, such as cloning and adult longevity. At some point, something went terribly wrong in the lab, as shown on one of the camcorder tapes; an Armsy escaped from its containment, which possibly led to a cannibal/mutant uprising that left the facility overrun. Almost all human inhabitants are gone, leaving behind decaying corpses, bloody body parts, and a few live mutants and cannibals. This suggests that this has happened fairly recently, as the head scientist Dr. Cross can be found at the end of the game, dead. Presumably killed by his daughter who stuck crayons into him.

A newspaper clipping can be found with the headline "Siblings Still Missing" in Cave 3. A milk carton can be found on the Yacht depicting Zachary, another missing child. It can be assumed that either Sahara took the children while the lab was still functional, in order to experiment on them, or to use the resurrection obelisk.

Blue tent on the shore.

There are many Abandoned Camps scattered across the The Forest. These groups include, but are not limited to:

These groups seem to have visited the forest at assorted times and to all have been cannibalized with no survivors.

Yacht just off the coast of the island.

At some point, a yacht crashed in a small bay on the west side of the peninsula.

This yacht seems to have arrived in 1984 or later. Supporting evidence includes the yacht magazine dated to 1984. On rare occasions Matthew Cross can be seen walking around on the yacht, so he may have a connection to it, or perhaps he uses it as a temporary shelter. Several drawings made by his daughter Megan Cross can also be found.

The exact sequence of these events is unclear, and could paint radically different pictures of Matthew Cross depending on their order. For some period prior to the lab's downfall, Matthew worked for Sahara Therapeutics as head of the Jarius Project, researching the resurrection obelisk as indicated by his credit in Orientation Slideshow #2. He was at least aware of the power obelisk, as referenced by an email that he sent noting that it could take down a plane. This suggests that with his knowledge of the power obelisk's ability to take down planes and the resurrection obelisk's ability to revive dead children, he took down the plane the player starts the game in, in hopes of acquiring a live child, and uses said child in the ultimate goal of reviving his daughter.

He had a wife called Jessica, who divorced him at some point, along with filing a restraining order against him. According to the dates on both the restraining order and the Autopsy Report, the restraining order was filed 3 months before Megan's death, although the year is unknown. The restraining order also specifies "the father will have no contact with mother or daughter." It is unknown whether Jessica was aware of the full nature of his work at Sahara Therapeutics. Megan appears in a Camcorder video showing her alive and in a wheelchair in what appears to be the Sahara Lab's Cafeteria with many other people present. Another video shows Megan, again in a wheelchair, present during the escape of an Armsy. The autopsy report can be found and picked up which shows that Jessica was murdered in a homicide by multiple stab wounds and head trauma.

Matthew eventually gets fired from the lab for unethical and inappropriate use of company equipment, presumably tinkering with the resurrection obelisk. Matthew is on the peninsula alone (except for the cannibals), and he decides to use the power obelisk to bring down an airplane to steal a living child (Timmy) to revive his daughter. He is the red man who is seen by the player after the plane crash. The red paint acts like a protection from the cannibals. 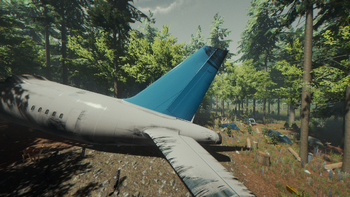 Back of the plane. 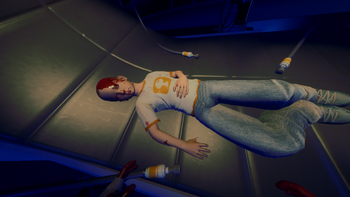 After taking down the plane, the screen cuts to black with the text "One Year Later". The player and his son are being hosted on a talk show, where the player competes in a friendly tree chopping contest with the host, known as Doran. It is assumed that the player did the same thing that Matthew did, kidnapping a child, and resurrecting his son. During the cut scene, Timmy is shown to be having small tremors and shakes. The happy music turns to horror as Timmy begins to have a violent seizure on the ground, implying that he will undergo a mutation just as Megan did. The character rushes over to comfort Timmy. Timmy's spasms suddenly stop and he looks up at his father, the player, and smiles. It immediately cuts to black and the credits begin to roll, The next scene appear within Timmy's perspective as he is now a young adult, in his small apartment, he looks over his bulletin board with a map of an unknown island (with a possibility that said island has a link to future plot). Scene ends in another cliffhanger as Timmy goes into seizure again. He walks to his window, overlooking a city.

If the player chooses to shut down the device, he will leave Timmy behind (even more signified as he burns his remaining photo of Timmy) and return back to the island with the possibility of being rescued (albeit without Timmy with him). The game will return to normal with pacification and horde mode unlocked via secret artifact, and 5 new craftable decorations. Enemies will be at maximum aggression after beating the game.