Sticks are the primary building and crafting material in The Forest.

Sticks are an abundant natural resource that can be found around trees or obtained by cutting down small trees or saplings with a weapon. Sticks on the ground may be picked up by pressing E. The player can initially hold up to 10 sticks in their inventory, however this number can be increased to 20 after crafting a stick bag. Sticks are used in a number of crafting recipes and structures, including furniture, shelters, storage, traps, tools, and weapons. Poking at the ground with a stick will occasionally dig up coins and stones. Sticks may be also used as a weapon, however this is discouraged due to their low damage output. 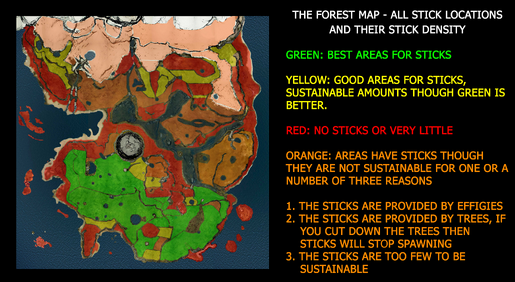 Sticks can be stored in the following:

The player may store additional sticks by making a stick bag. This increases the carrying capacity from 10 to 20.