Skulls are material items that were made collectible in update v0.08 of The Forest.

Skulls are an item that can be found in different caves, the yacht, and in random other places around the Peninsula. They can also be obtained by cooking a head of a cannibal on a fire or by destroying effigies which can be found in the cannibal villages. Once the player has an established base in the game, skulls are most often used for crafting skull lamps, which burn constantly and never need to be re-lit.

Cannibal villages tend to be hubs of attention for patrols of 2-5 cannibals. The largest village in the south-east of the map attracts the most cannibals and consequently has the most skulls! Scout the area, learn it, know the nooks and crannies. This will improve your survivability. Once you have a feel for the farming site, choose an area on the outskirts with some clearing to build the farm.

Skulls are a useful resource for crafting lasting light sources or clubs. At later stages when your base grows, you will want to have lighted paths and buildings. The various skull lamps fill this role well because they do not need relighting like standing fires do. As a balance however, the skull lamps do not provide a significant area of lighting as the standing fires do. In order to light up areas as effectively as standing fires, more skull lamps are needed. Since sticks, cloth/rope, and sap are relatively plentiful, skulls are the limiting resource. This section discusses how to acquire skulls quickly and safely.

Safe Zone - Any area you determine that is at the rear/center of the skull farm that is heavily fortified, yet easily repairable.

Funnels - Constructed avenues of attack that cannibals will use to get to you, but will die at the end of the avenue.

Effigy Zone - A perimeter that surrounds or is in front of the skull farm that will aggro the cannibals but not the mutants.

Source - This is whatever village you choose to farm from.

Examples: One possible configuration might involve the following setup: 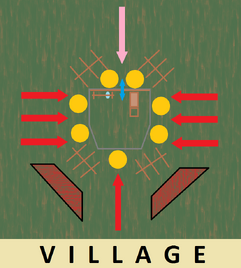 Here we have Red Arrows for Cannibal Attack Routes, a Pink Arrow for their Secondary Attack Route, 7 Yellow Circles representing Campfires (which don't disintegrate when run over), 4 groups of Brown Hatched Lines representing Barricades, 2 Black/Red Trapezoids for the Effigy Zones, a Grey Boundary outlining the Safe Zone, and a Blue Arrow for the Entrance/Exit. Interior objects include a rabbit breeder, a bone box and an arrow box, a jerky rack, and a rain collector. The cannibals will charge down the attack paths and run onto the campfire where they will catch fire. Pick up the bodies and drop them on the campfires, if necessary. Bodies burning on campfires will always yield 6 bones and 1 skull. Have plenty of arrows before you begin farming.

This setup is defensible by one player with no armor, if they have sufficient meds. There are several important notes.

An advantage to player survivability in this farm are the bones dropping near the rock walls. The bones can be used to craft bone armor, which will keep the player invulnerable to harm.