Sharks are hostile animals that can be found swimming particular areas of the ocean where the water is too deep to stand in. If the player comes too close, a shark will charge towards them and attack them by biting.

Sharks can typically be seen swimming long before the player is in any danger due to their tell-tale dark shape in the water. If the player gets too close, a shark will turn and charge towards them. A hit from the shark will deal 55 points of damage regardless of armor worn, but long as some distance is kept, they ignore the player. The player has to be rather close to the shark in order to provoke a bite, and bites can be dodged by jerking to the left as it tries to bite you. It will not immediately try to bite again, but will instead swim off for a bit. Sharks can be killed from the shore or any platform out of the water with 2-3 arrows or 1-2 spears. The shark will flail with each hit and, when dead, the body will sink to the bottom.

On the PC version of the game, setting the ocean quality to flat makes the detection of sharks and other underwater creatures or objects an easier task.

Sharks can be found at certain locations, they aren't everywhere in the oceans. Here are the locations listed on The Forest Map

Multiple shark corpses can be found washed up along the shore line which currently serve no functional purpose and are only there for aesthetics. Their heads can be used when cut off to create trophies. Seagulls tend to fly around and land on the dead sharks. 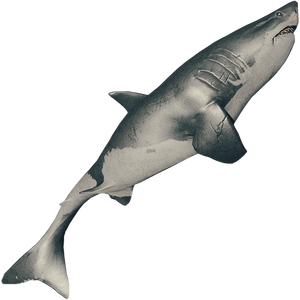 You can find dead sharks in some area of the beaches. These appear to be great white sharks. They are much larger than the ones in the ocean. It isn't explained in the game why this breed of shark are found dead on the beaches. 3 can be found under water near the shipping containers as well. The only way to get shark heads is from these sharks. Sharks produce no material or meat when you kill them.

As of update v0.67, sharks now spawn in multiplayer. If you die to a shark or by drowning, you will not be able to be revived. This means all your stats will be reset. You will lose all your strength and athleticism gains. Consider reloading if this occurs.