The Sahara Laboratory, also known as the Research Laboratory or simply lab, property of Sahara Therapeutics is an area deep underground in the peninsula. To access the Lab, the player must go through the Vault Door, located at the end of Cave HC at the bottom of the sinkhole. The majority of the story's plot is discovered here. Upon leaving, the lab cannot be visited again during the same playthrough, as the entrance is blocked by a cave-in.

The Sahara Laboratory was founded on some unknown date on the Peninsula that constitutes the playable area of The Forest. It runs deep underground, with levels B-G all being below the cave systems, though it also reaches high into the mountains with an observatory. The lab is owned by Sahara Therapeutics, who purchased the peninsula in order to conduct its genetic experiments.

Mathew Cross worked here for some time before the events of The Forest. He was fired due to using the company equipment found in the lab for personal reasons.

The lab seemingly dealt with genetics mostly, though it also had a supernatural component with the obelisks.

The observation rooms were set up to monitor and record patients and their genomes, particularly noting transformations such as the Armsy or Virginia mutations. It appears that Sahara induced these mutations in patients as a way to explore increasing longevity (possibly related to the obelisks).

At some point, something went terribly wrong in the lab, with a possible cannibal/mutant uprising that left the facility overrun. Dead bodies that appear to be cannibals and/or research patients are strewn across the lab, most often near the observation rooms. Many parts of the facility are covered in broken glass, bloody body parts, and upturned furniture, in addition to parts of the ceiling and piping having collapsed. Cannibals, babies, and some mutants still linger in the facility. It appears that the facility was left in a hurry, as evidenced by the multiple meals left out in the cafeteria (Though these could belong to Dr. Cross, Megan, or Timmy). Additionally, it seems that the evacuation was not too far prior to the events of The Forest, as there is a scientist, who seemingly committed suicide by hanging himself, located deeper in the lab, with minimal signs of decay, though he could have stuck around trying to survive for a while after perhaps being left behind in the evacuation. Further signs of a struggle come from the man-made barricades piled against doors, notably at the door leading to the room with the hanged scientist. 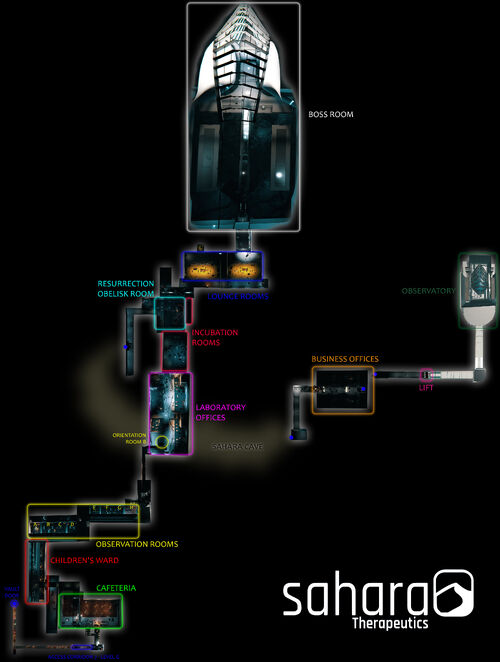 The laboratory, connected through a series of ventilation shafts, piping, and natural cave formations, has a few main areas:

All of the enemies encountered in the lab are "off". Each seems weaker than normal, particularly the Armsy and the Cannibals. All enemies are colored differently from normal.