Rabbits are small passive animals that were added in update v0.01 to The Forest.

Rabbits can be found almost everywhere in The Forest, and can usually be killed with one hit using any type of weapon.

Once dead, the rabbit can be harvested for one rabbit fur, one raw rabbit meat, and one rabbit head. The harvested meat can be cooked on a fire or dried on a drying rack and eaten.

A rabbit that dies while burning can be eaten immediately, but will give neither rabbit fur nor a rabbit head.

Their fur is essential in crafting multiple items, including the pouch and rabbit fur boots. Along with other animals in the game, the rabbit's head can be put on a head trophy.

Rabbits can be found almost everywhere on the surface of the peninsula. They are commonly found in wooded areas and the plains and are less common in the swamp or coastal regions.

The snowy mountains sport their own type of rabbit (the "Snowshoe Rabbit") with white fur. It behaves exactly the same as its brown cousin and can thus be interacted with exactly the same way.

Rabbits are easiest to kill with the Crafted Bow or Modern Bow, as they are quite skittish and can run very fast. Note that notching an arrow will cause any nearby rabbits to flee, so make sure to either be distant enough or walk around hunting with an arrow already notched. Small rocks can also be used to great effect.

Hunting rabbits using a spear or katana can work, but it is much more difficult than just ranging the rabbit. Simply charge after the rabbits and then just stab them at the right point of time.

An animal trap is needed to capture a rabbit without killing it. Once the rabbit is caught, it can be placed alive in a rabbit cage.

Catching rabbits and other animals is rather easy. You do not need to chase the rabbits and other animals in. This will fail most of the time as animal traps are regarded as structures, so animals will most of the time run around them. They will eventually walk straight to the trap and become caught. If you move near the animal while this is happening, you will scare the animal off. Patience is recommended. Spread your traps out to cover as much ground as possible. Place them in areas where there are rabbits.

Once a rabbit is trapped in an animal trap, you can use the E key to pick them up. If you have a rabbit cage, press C to place the rabbit in the cage. To pick the rabbit up again, press E. If you wish to kill the rabbit from the cage, first pick it up, then use the Left Mouse Button. This will kill the rabbit and drop it on the ground in front of you. You can then skin it for rabbit fur and rabbit meat. Whilst holding a rabbit, if you use the Right Mouse Button, it will let the rabbit go and they rabbit will run away from the player.

If you pick up a rabbit from a animal trap and you do not have a rabbit cage prepared, you will have no choice but to kill the rabbit or let it go. If you are in multiplayer, you could have another player build a rabbit cage so you can place it in if this does occur.

Whilst holding a rabbit, if you interact with boat controls, climb a rope, enter water, pick up animal heads etc. You will drop the rabbit.

In multiplayer games the rabbits in a cage are accessible by all players in the game. Keep that in mind if you want to protect your bunnies from thievish survivors.

To breed rabbits, you will need to build a Rabbit Cage.

When there are two or more rabbits in the same cage, rabbits have a 10% chance of breeding every time the player sleeps, up to seven rabbits can fit in a cage, they will stop breeding after that unless separated. To increase the chances of a breeding, players should seperate rabbits, two per cage. If the player is desperate, they can save before sleeping and reload if rabbits don’t breed. The player can use console commands to spawn ‘held rabbits’ then place them in the cage to help with the breeding process. The command is additem 77. The player can take them out and either put them in another cage or harvest them for rabbit meat and rabbit fur (default Left Mouse Button). Remember that 10% is a very low chance. It can feel like rabbits won’t breed, but they will eventually. The more you have, the higher your chances of breeding are. Always check if rabbits have bred and keep two or three in a cage if you have one spare. If it is too frustrating, save before sleeping and reload. Or use console commands to get some extra rabbits. Stressing over this mechanic is not worth it, though the reward late game is definitely worth while. 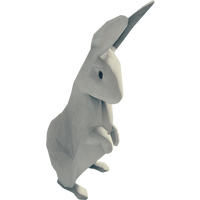 White Rabbits, also known as Snowshoe Rabbits, are rabbits that are found in the snow. They are completely identical to normal rabbits except for having different textures. If you catch a white rabbit in an animal trap and the place it in a rabbit cage, it will turn into a brown rabbit. They are meant to be snowshoe hares.