Platforms are custom buildings that have two variations, the platform and side rock platform. They can be built by opening the Survival Guide and then the 2nd page of the Custom Building section.

It can be used as a platform to see over your defensive walls or other hindrances. To get on top of a platform, simply jump (if it's low enough), attach a rope, or build a staircase to it.

Platforms can be destroyed by knocking ajar the logs supporting its base, and this also destroys the ropes or bridges attached to it.

When placing these Platforms, if you do so; low enough to a Custom Floor, the supports won't try and stick through quite so bad as if you had held the blueprint high above the Custom Floor.

When placed against a cliff or a similar game object, the platform will convert to a kind of cliff platform. This changes the platform dramatically and saves a lot of logs.

There are some structures that can attach to platforms:

In update v0.36, they added new building called the Rock Side Platform. This is the platform when used against certain in game cliffs and other objects. Bring a platform next to a big rock to swap to a lighter structure attached by the side to the rock. Has 3 anchor points. 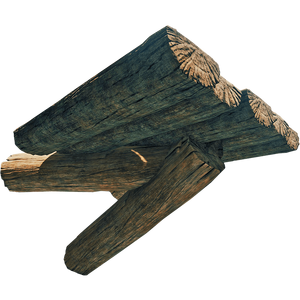