The Milk Carton is a story item that can be found aboard the yacht. It is a milk carton with an image of a missing child on it named Zachary. It describes him as a boy of 12 years old with a heavy build.

The message on the milk carton can be hard to read. The last name appears to be purposely left blurry, although the rest can be made out. It states the following: 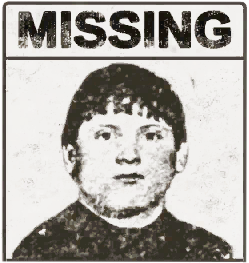 ZACHARY ------ was 12 years old when he was last seen playing outside of his house. He is 5 feet, 3 inches tall, heavy build, light complexion. He has blue eyes and dark brown hair.

If you have seen this child please report any information you may have to:

One theory is that Zachary is the child of the yacht owners, either stolen by Sahara for experimentation or dead from a kidnap / murder scenario. Either way, the obelisk drawings scattered nearby suggest that someone attempted to put Zachary in the resurrection obelisk. If that endeavor was successful, Zachary would most likely be an obelisk victim / mutant now. He may be a Cowman since Zachary is said to be large.