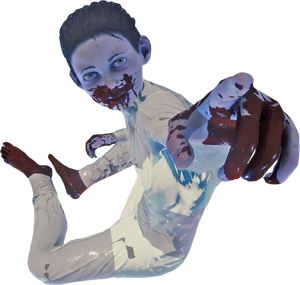 Megan Cross is the daughter of Mathew Cross, a scientist who used to work for Sahara Therapeutics in their research laboratory.

Megan was a young girl, raised and split between two divorcing parents. Prior to the events of the story, her mother and father became estranged, with a restraining order in place against Mathew. Megan appears to have been an average child, although with some unknown health issues, with a love for coloring, before her untimely demise. 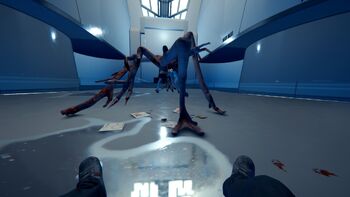 Megan has three forms, only two of which the player can witness in person. She is using what appears to be an oxygen mask and a wheelchair for her unspecified medical problems.

Events of The Forest[]

Mathew, her father, kidnapped Timmy at the beginning of the story to use as a sacrifice for the resurrection obelisk, which in turn worked and brought Megan back to life. However, she (presumably) killed her father upon resurrection, leaving his body nearby the obelisk, with crayons in his chest, eyes, and mouth. The player finds clues to her existence before meeting her through her crayon box that can be found, the several Megan Drawings, and the camcorder tapes.

Eric finds a dead Mathew and Eric's own dead son shortly after finding the obelisk. After Eric, the player, concludes that he needs a sacrifice in order to bring back his son, he follows her bloody footsteps around the facility, until he finds Megan in the middle of a large room. As he gets close to her, Megan is revealed to be surrounded by drawings and a toy plane, which she "flies" around. As Eric gets almost within reach of the girl, Megan turns to him, revealing her mouth, hands, and feet that are all covered in blood, suggesting she is a younger cannibal now. Megan crashes her toy plane, then points to Eric, revealing she knows how he got to the island. Megan then begins having a seizure, Eric steps back, and mutated foot-like appendages begin coming out her throat. After her transformation is complete into a creature reminiscent of a Virginia, complete with popping out mutant babies, the monster attacks Eric, forcing him to eventually kill the girl. After he does, the limbs fall off, and Eric takes her body and puts it into the artifact in order to resurrect Timmy. However, the results in the computer monitors start displaying "LIVE SAMPLE REQUIRED". Megan's corpse falls out of the obelisk, and a keycard falls off of her.