The Flintlock Pistol or Old Gun is a weapon that was added in update v0.49 to The Forest.

The flintlock pistol can be assembled by finding and crafting all 8 parts of the pistol. These parts can be found all over the Peninsula in caches that are underneath a rock which can be blown up with explosives. It uses old gun ammo, which can also be found on those locations or in other places on the peninsula including the cave system. The Flintlock Pistol is a one shot gun and must be reloaded after each shot. The reloading time takes about 3 to 4 seconds.

As of v0.53c, after all caches are found and the gun is crafted, the parts still spawn in their respective location after loading a save. This allows you to craft an extra gun that you can place on a weapons rack to give to another player. You can only hold one flintlock pistol at a time.

Strength has no effect on the Flintlock Pistols damage. It will do the same damage whether your strength is 10 or 99.

As of v0.63 the pistol has an aim-down-sights system so it is easier to aim however before it could only be fired from the hip. Due to needing to reload from shot to shot, the pistol can be rather slow against packs of cannibals, particularly painteds. It is best for fighting 1-3 cannibals or 1 mutant at a time. 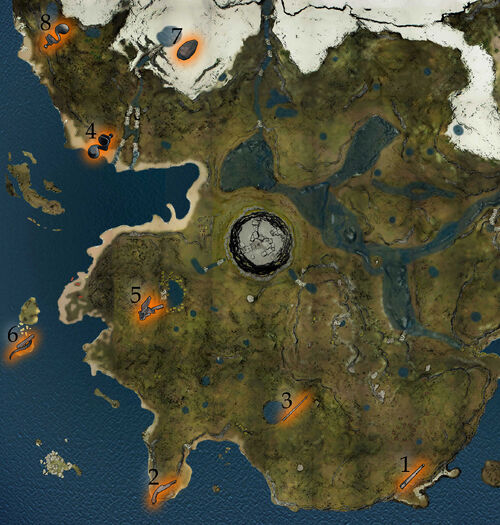 The gun parts are located under light grey colored rock mounds. These need to be opened up with explosives. The type of explosives you can use are bombs, sticky bombs, head bombs, dynamite and explosive wire traps. Molotovs will not work. When you blow these rock mounds up. There is a chance you will find old gun ammo as well as, a rope, a watch, or a skull. If you are able to lure mutants over the cache, they can destroy it. Only mutant babies are not able to destroy the cache.

Gun part 1 is the barrel or stock

Part 1 - A short distance south of the main cannibal village near the edge of the cliffs over looking the ocean.

Gun part 2 is the sideplate, the base or the barrel.

Part 2 - At the end of the large peninsula, behind the Sacred Tree, near the edge of the cliff over looking the ocean.

Gun part 3 is the rod,, ramrod or the Barre, barre is the french name for it.

Part 3 - Inside one of the huts of the Lakeside Village.

Gun part 4 is the cock

Part 4 - Near the Beach Hut Village, also close to a dead shark, near where the river comes out to the ocean.

Gun part 5 is the trigger or the Frizzen

Part 5 - Behind Geese Lake, a short distance from the edge of the cliff that goes down to Geese Lake.

Gun part 6 is the spring or trigger

Part 6 - On the southernmost of the two islands near the shipping containers, be cautious swimming as there is a shark in those waters.

Gun part 7 is called the flint

Part 7 - Near Snow Lake and the Mountain Area Grave in the snow area.

Gun part 8 is the jaw or hammer

Part 8 - At the top left end of the map. Near the Beach Hut Village but above it, near the cliff edges.