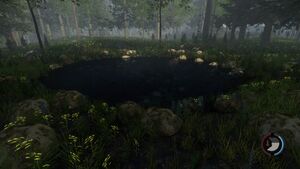 A pond in the forest.

Fishing Ponds are water locations placed all across the Peninsula. They are sometimes found adjacent to cannibal villages, and also sometimes have luggage seemingly from the plane scattered about. When near villages, they often have tall scouting towers either in the water or close by.

These ponds of water sometimes have spears planted in or nearby them, which can be used to catch fish swimming around. The player can then subsequently cook them on a fire or drying rack to refill the hunger meter. Ponds contain polluted water, which can be drunk to refill the thirst meter at the expense of a tiny bit of health, or the dirty water can be stored in a waterskin for later or a pot for boiling.

Drinking from a pond will not fully refill the thirst meter until the player has done so multiple times, so it is advised that the player first fill and then drink from the water skin to fully restore thirst.