Fish are a group of passive animals that may be found in the ocean, river, ponds, or in cave water. When killed, fish drop as a collectible item, the raw fish, which then can be cooked or hung onto a drying rack.

Fish are found in abundance near the beaches just offshore, and in lakes and ponds inland. There is currently not much of a difference between the fish found in the different kinds of water bodies, meaning most marine fish can be found in ponds and lakes and vice versa. Interestingly, fish tend to be less common in deeper parts of the ocean or even in the middle of larger lakes.

Much like birds, fish can be killed by any weapon in a single hit. Even though this makes for a wide range of possibilities for catching them, using a spear is advised. When the player kills a fish with a spear, the fish is impaled and becomes immediately collectible, eliminating the need for searching the dead fish first. That spear fishing is the intended way to catch fish is further indicated by the weak spear pickups found around some of the fishing ponds throughout the peninsula.

As of 0.41, the player also has the option to capture fish using the animal trap in a similar fashion to catching mammals. Simply place the trap in shallow water and wait for fish to swim in. See the corresponding page for more information. 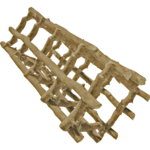 Fish come in many varieties, all of them are listed in the nature guide section of the survival guide.