Edit
watch 02:52
Roblox: DeepWoken - The Loop
Do you like this video?
Play Sound
This page is about the structures built by the player. For the various structures made by cannibals, see Cannibal Effigy.

Effigies are bizarre constructions made of sticks, rocks and body parts. All effigies must be completed and set on fire to have an effect on cannibals, unlit effigies have no effect.

The player can start building them by selecting one of the four from the bloody effigies tab in the survival guide but only if the sanity level of the player drops below 90%. They consist of body parts from the cannibals (heads, torsos, arms, and legs) as well as some sticks and rocks.

No matter which cannibal is dismembered and used, the effigy will always sport tribal male cannibal body parts.

Their main purpose is to cause fear in cannibals and keep them away from the player, similar to how red paint works. How cannibals react to a player with red paint on is almost exactly the same as how they react with effigies. It will cause most cannibals to fear the player and avoid them, though there are a few that will still attack the player. The reason for this is actually done on purpose by the developers. The developers placed ‘fuzziness’ to the coding into the game, that causes some cannibals to ignore the standard AI rules. The reason for doing this is to prevent players learning and figuring out cannibal behavior. The developers want to keep their behavior a secret to add immersion to the game. Though this is up to the player if they find effigies worth it or not, most players find them too inconsistent.

Building an effigy won't stop the cannibals from attacking, they may approach a burning effigy with caution or run away from it or even ignore the effigy. If the player approaches the cannibals, they will often attack the player with complete disregard for the effigy as approaching cannibals is deemed as an act of aggression.

When the developers were asked about aggression of AI they stated:
We don't want to spell out exactly how the ai works, but for aggression there are lots of different triggers that can affect how they behave. Getting too close, killing females in front of male members and being in certain parts of the map can all change how aggressive they are. And there is always some 'fuzziness' built into the AI, so they don't always do the same thing each time.
As the developers have added fuzziness to the AI, this would explain why cannibals sometimes ignore effigies.

Here are the comments by the developers on the effects of effigies:

There are four effigy types that the player can build. 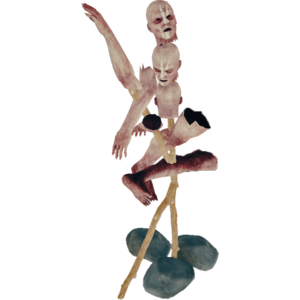 A Small Effigy is the lower costing effigy that was added in update v0.01 of The Forest. It is the cheaper effigy that the player can build, it only requires 3 dead cannibals.

It burns for 10 minutes and breaks into 5 bones, 3 skulls and 3 rocks. 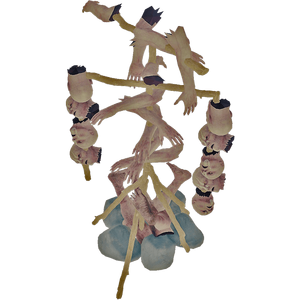 Large effigies, also known as Big Effigies, are higher costing effigies that were added in update v0.01 of The Forest. It can be used as a decoration. Large effigies are the most expensive effigies a player can build. 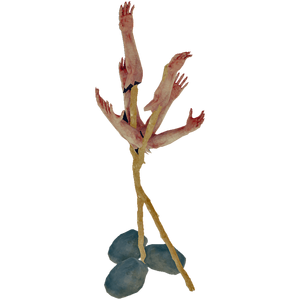 Arm effigies are effigies consisting mostly of arms, they were added in update v0.03 of The Forest. It consists of a K-shaped structure of sticks with seven arms impaled on the top. The effigy is attached to the floor with three rocks. This K-shaped structure is also used in small effigies.

It burns for 10 minutes and breaks into 7 bones and 3 rocks. 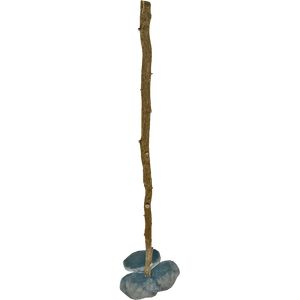 The Custom Effigy is a custom variant of effigies that the player can customize, they were added in update v0.25 of The Forest.

A Custom Effigy can be the most simple or advanced Effigy in the game. Once crafted you can add to it, making it more effective. The more that is attached to the custom effigy, the more effective it CAN be. Custom effigies can be used as decorations as they can have a lot of customization features. Custom effigies replaced simple effigies in update v0.25. Simple effigies were essentially just a head on a stick. Custom Effigy burning time is determined by number and types of items attached to it.

It burns for 10 minutes but additional Arm, Leg, Head, Skull or Bone increase its burning time by 65 seconds, Torso increases burning time by 50 seconds while additional Sticks don't increase burning time. Custom effigy is the most cost effective effigy. While Arm Effigy burns for only 10 minutes, Custom effigy with the same amount of materials burns for 17:35 minutes. Maximum burning time for effigy is 20 minutes so adding a large amount of materials is unnecessary. The "cheapest" effigy can be built with 10 bones and/or skulls and will burn for 20 minutes (same as expensive Large effigy). After burning it only breaks into as many bones and skulls as limbs and heads respectively have been used for building.

The following items can be be additionally used in the custom effigy: