A body or corpse is an object that is left when a cannibal is killed. They can be picked up and moved by pressing E nearby them, and they can be dropped using G. Individual body parts such as heads, legs, and arms can be individually cut off of a body by hitting its respective joint about 3 times. Bodies can be used as bait for starving cannibals in order to lure enemies away from a player's base or into traps. When the body is put on a fire, after a short period of time it will collapse and drop 6 bones and a skull. Bodies can be placed in a log sled and sent down ziplines, but only in singleplayer. All Bodies will be deleted after going to the Main Menu. 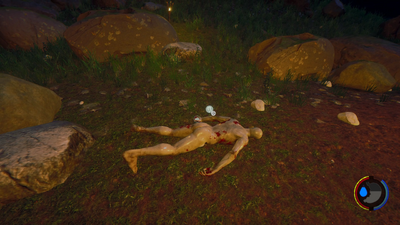