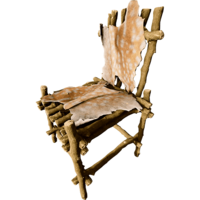 The Chair is a furniture building that was added in update v0.46 of The Forest.

It functions identically to the Bench, allowing the player to sit and restore Energy. It is built from the Survival Guide.

While sitting, the player will regain energy through an effect called energized. It will restore energy fast while sitting, similar to that of the cassette player. It can be an effective way of restoring energy without the use of consumables. Every seat has the same effect.