View source
watch 02:52
Roblox: DeepWoken - The Loop
Do you like this video?
Play Sound

The Armsy is a type of creepy mutant, given their name because of their many arms. There are two variations: the common pale skin-colored version and the rarer blue version.

Armsies can be found from the beginning in the game, but only if the player moves deeper into the caves where they spawn in scripted areas.

After day 7, they will begin spawning above ground (day 14 for the stronger blue variant). Up to three can attack at any given time, though one or two is much more common. If unprepared, Armsies can cause severe damage to the player’s base.

An Armsy is taller than the player and normal mutants, along with being significantly stronger than them. They will bellow angrily intermittently, so the player can usually hear an Armsy before it is seen. As with all creepy mutants, it is best to kill it from a distance with fire and explosives, so that it does not get a chance to hit.

Just like the Virginia, it appears to be made out of 3 bodies. It has 6 arms, deformed legs, backward feet and a tentacle-like limb, possibly the umbilical cord. It does not have a head or any recognizable facial features, but it does have a slit down its frontal end that opens when detecting the player, and can be assumed that it sees from this area.

It will swing its arms when trying to attack the player. In the trailers, it is seen breaking defensive walls on the surface. It takes 2-3 hits to kill an unarmored player.

When wandering the surface, they tend to randomly knock down trees.

They are sometimes non-aggressive, and will wander seemingly randomly. However, if in this mode, they will attack if provoked, as well as destroy any obstacles in its path. If one is found wandering like this, it is best to leave it alone and leave the area stealthily.

Armsy will attack the player's buildings unprovoked, provided it has stumbled near them. It does not need to sense the player to start this behavior.

Armsy is suggested to have been created by Sahara after a small boy had been put in the Resurrection Obelisk, resulting in the child becoming malformed and developed multiple appendages, facial distortions, and high aggression.

As seen in the Orientation Slideshow, he is called "Subject 82C6", with "Armsy" being six years old at the time of his mutations, with his name likely being a nickname issued by the staff.

According to the slideshow, he developed multiple limbs, which is stated to be a "sibling anomaly", suggesting that Armsy might actually be more than one child fused together.

At some point during the laboratory's active research phase, an Armsy broke free of containment and began attacking and killing the scientists nearby. As Megan Cross was present at the time, it is likely that this incident is what lead to Megan's death.

Luckily, with several Armsy cave spawns, the player can approach the Armsy from above. In this case, the player should shoot flame arrows or throw Molotovs from their vantage point, taking care not to fall, which will both damage the player and put him in reach of the Armsy.

In cases where the Armsy must be approached on flat ground, or if the player falls to the Armsy's level, it is best to kite it rather than attempt melee combat. Fire weapons are still effective, though the Armsy will often stumble towards the player thrashing even when on fire. Additionally, it is almost never alone so the player should take note of nearby babies or mutants as to not walk straight into them while attempting to avoid it.

If you can catch the Armsy by itself, or kill off its escorts, an effective way of killing it is to poison it with one or two poison arrows and then attack it with a chainsaw. The slow from the poison and the flinch from the chainsaw will lock up the Armsy, making it an easy kill. Note this will leave you bloody.

Armsies tend to attack, either alone, with other creepy mutants or leading a group of 3 to 5 cannibals (Mostly 3). Sometimes, they will not locate/sense you, and will just stand or wander outside or around your base as mentioned above. If it attacks your base, it will destroy buildings very quickly if building destruction mode is switched on. However, if you have multiple layers of walls, it typically does not penetrate past one wall, but it will intermittently attack and eventually level anything that interferes or gets in the way of the AI tracking to your character.

You can block its attack. if using weapons with 10 block like the rusty axe, club or turtle shell, it will do no damage at all.

It can be a good idea to run from your base or save and exit if an Armsy appears at your base. It may seem counter-intuitive, but it is best to draw it away, as it will topple all of your hard work until it can reach you; it is an unpredictable enemy. Armsy is able to knock down trees, and thus attempting to elude it in a tree house will result in it attacking the base of the tree you're in until it collapses.

The chainsaw method should also work on the surface; however, it will be much more difficult to isolate the Armsy on the surface. 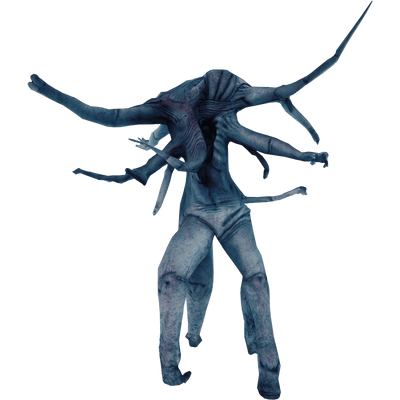 Later into the game, a blue-skinned Armsy may be encountered. They have more health, and are 33% stronger than a regular Armsy. The player is advised to take extra caution against a Blue Armsy, due to its higher stats. Although called "Blue Armsy", they appear more gray, similar to the pale mutants in direct sunlight.

In Cave 6, a blue Armsy can be found guarding the Keycard and Camcorder along with a half dozen mutant babies. Deep within Cave 7, two blue Armsies will be encountered together, guarding a gate. The player must take extra caution when trying to take on both mutants at once.

The Blue Armsy can be found on the surface traveling with pale mutants and other creepy mutant(s) beginning around Day 14. Though they are quite rare for a while, they will eventually become more common. As the days progress further, up to four Blue Armsys can be spotted travelling along with other creepy mutants, though most of the time there are only one or two.

A patrol type containing more than one blue Armsy would be 2 to 4 blue Armsies walking with a single Cowman.